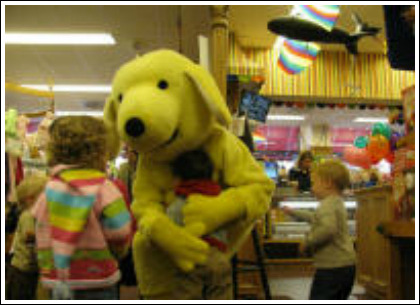 Moses is a fluffy off-white mixed cocker spaniel that is a regular at Kinder Haus Toys. Every morning his owner Kim takes him for a walk in Clarendon. His steps get a little livelier and his rear end starts to wiggle when he approaches the toy store.

That’s because he knows he is going to get a treat that is waiting for him behind the counter. Moses is such a favorite of the staff that his picture appears on the front door. There is another sign on the door that says, “Sweet Doggies Welcome.” 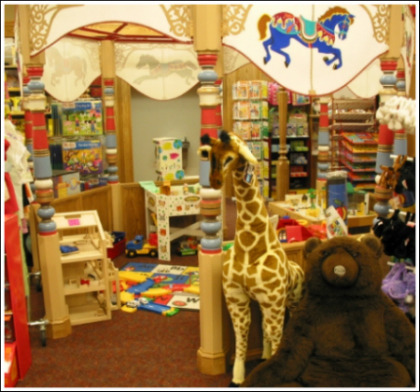 Back in 1982, when our youngest child, Jeff, was a seven-month-old baby, I was working solo in our then, tiny 600 ft. toy store, Kinder Haus Toys. As I often did before Jeff started walking, I took him with me to the store where he resided in a portable crib with a collection of toys that he liked to either play with or throw on the floor.

The customers often made a big fuss over the baby-in-residence and that entertained him as well. All things considered, he was a contented little guy. I think, too, he enjoyed all the color and stimulation of the toys all around him.

One chilly, winter afternoon Jeff came down with a cold and a slight fever. I had about three hours to go before I could close the store.

One of the customers, who was in the store and understood what was happening, ran home to her house and got extra baby blankets and other provisions to get us through until closing.

Jeff is twenty-nine years old now so this happened a long time ago. I still remember her kindness. 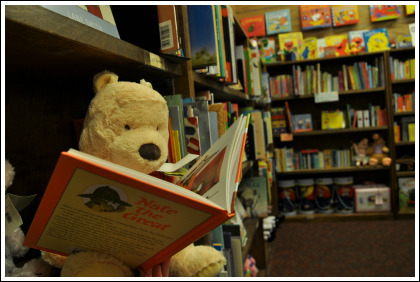 A few years ago, about a week before Christmas, a young man came in to shop for his young son. He told me that his son loved Playmobil, which is line of role-playing toys. Playmobil is a German company that manufactures their toys in Malta. It is popular with children all over the world.

The young man told me that he drove all the way over to Arlington from a neighborhood in south Alexandria because he likes our selection of Playmobil and also the service. He went on to say that because of family circumstances, this year it would have to be a smaller Playmobil set.

I told him that when my girls were little they seemed to enjoy going through the Sears catalog as much as playing with the toys. I suggested that he take a give-away Playmobil catalog that showed the whole line and give it to his son.

He came in many weeks later and said his son had poured over the catalog dreaming of all the toys he might have someday. He loved his new, small Playmobil set too.